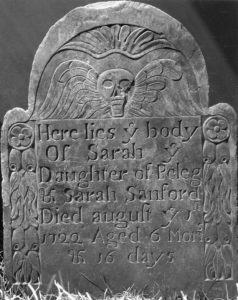 The winged death’s-head was one of the earliest designs used by New England stone carvers, originating in the greater Boston area in the mid-1670s. Soon after its introduction, the death’s-head became one of the most popular motifs in New England and remained in use until the end of the eighteenth century. While it is impossible to know exactly how Puritan communities interpreted the design, its pervasiveness suggests a significance which transcended socio-economic divisions. In other words, it was appropriately used by both rich and poor.

A traditional medieval symbol for death, the winged death’s-head communicated not only the inevitability of death, but also its trans-formative nature of life and death itself. Living in a time where ten to thirty percent of children did not survive their first year, death was an ever-present part of everyday Puritan life. Death’s-Heads acted as reminders of this reality and instructed the living to prepare for their inevitable fate.

Simultaneously, these images also signified the spiritual rebirth they would experience in death. The skull, stripped of its mortal flesh, indicates life’s impermanence while the wings signify death’s metamorphic power. All temporal things, whether material or mental, are compounded objects in a continuous change of condition, subject to decline and destruction. This message indicates the Puritan hope of attaining salvation. At the same time, however, community members would have been equally as fearful of death because they faced the possibility of damnation. In this sense winged death’s-heads were equally terrifying as were they comforting.