Drake’s Raid on St. Augustine was a military event during the Anglo-Spanish War in which the Spanish settlement of St. 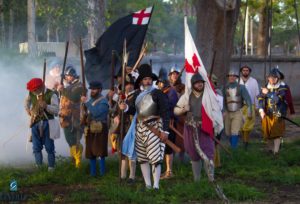 Augustine (Spanish: San Agustín) was captured in a small fight and burned by an English expedition fleet led by Francis Drake. This was part of Francis Drake’s Great Expedition and was his last engagement on the Spanish Main before Drake headed north to the Roanoke Colony. The expedition also forced the Spanish to abandon any settlements and forts in present-day South Carolina. You and your family are invited to join the living historians of the Men of Menendez and Drake’s Men on the first Saturday in June each year for this educational and entertaining day of history. Check our calendar for the specific date.

On June 6th, 1586 twenty-three ships approached the harbor of the Spanish colonial city of St. Augustine with 2000 Englishmen under the 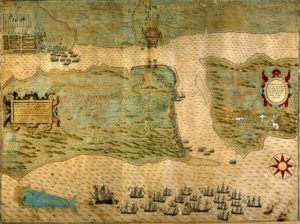 command of Sir Francis Drake. A day after making sight of the harbor, 1000 of these men, led by Captain Christopher Carlile, would land on Anastasia Island to mount cannons opposite the Spanish wooden fort and begin to duel with the Spanish forces there. Three hundred Spanish would abandon the fort during the night and with daylight approaching on the morning on the 8th the English crossed Matanzas Bay, taking the fortification and proceeding to drive the Spanish rear guard from the city of St. Augustine. Click here to read an actual account of a witness to the original event.

There was little difference in the general appearance of St. Augustine’s Spaniards and Drake’s men who sacked the city. The 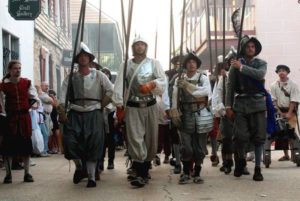 town’s elite would favor military styles (St. Augustine was a presidio or garrison town). During this period, there were few uniform regulations for Spanish troops in the New World – dress was left to the individual unit commanders. Consequently, there was little uniformity and Spain’s American garrisons tended to wear whatever clothing was available. The apparel of any slaves would have been much like poor Spaniards. Native Americans (Timucuan, Apalachee, Guale, etc.) in the town would dress the same as the Spaniards; rural “pagan” natives (not following the Spanish Catholic teachings) would be in traditional garb – loincloths, tattooed, painted, etc.

The reliving of Sir Francis Drake’s Raid on old San Agustín begins on Friday, May 13th and 14th at the Oldest House Museum ( the Gonzalez-Alvarez House) located at 14 St. Francis St. In St. Augustine from 10am to 5pm. 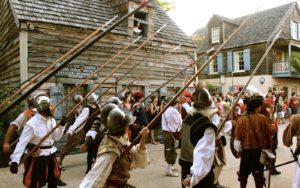 Saturday evening, the recreation of the sacking and burning of the town will commence at 7:00 PM in the old city beginning at the Old City Gates (including the Santa Domingo Redoubt on Orange Street.) A skirmish breaks out as the Spanish soldatos at the redoubt spot Drake’s men coming ashore. The Spanish soldados and the St. Augustine citizens flee with Drake’s soldiers in pursuit. Skirmishes continue as the Spanish move south on St. George Street towards the plaza continually trying to hold off the ever-advancing English soldiers. The final battle between the Spanish soldados and Drake’s men takes place at the Government House. This military display is intended to symbolically commemorate the temporary abandonment of the city of St. Augustine by Spanish colonial forces. After the town was looted and burned by Drake’s men, the Spanish returned to rebuild upon the same streets you walk on today! 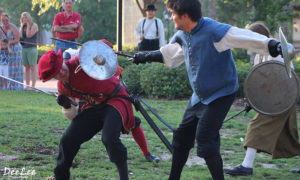