St. Augustine, Florida, that “noble and loyal city” is the oldest inhabited European settlement in North America. Founded by Don Pedro Menendez de Aviles in 1565, it was a valuable outpost of the Spanish Empire, serving as a haven for the imperial treasure fleets sailing from the New World to Spain. For over a century and a half, beginning with Sir Francis Drake’s raid in 1586 and ending with General James Oglethorpe’s attack in 1743, English troops and buccaneers repeatedly tried to wrest this strategic port from the Spaniards. 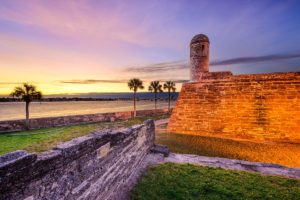 In 1655, Oliver Cromwell’s “Western Design” resulted in the capture of Spanish Jamaica, thus providing English freebooters with a safe base from which to plunder the Spanish Main. The “Golden Age of Piracy” had begun!

In 1668, Captain Robert Searle and his privateers sailed from Jamaica to loot the silver ingots held in the royal coffers at St. Augustine. Under the cover of night, they slipped into the harbor and attacked the sleeping town, killing sixty people and pillaging government buildings, churches and homes. The devastation wrought by these bloodthirsty pirates prompted Spain’s Council of the Indies to issue money to build a massive stone fortress on Matanzas Bay to protect the city. The Castillo de San Marcos still stands as an enduring reminder of Florida’s exciting heritage! 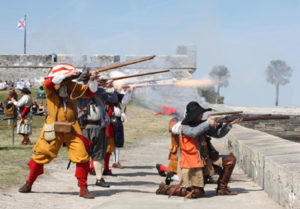 Join us on the first Saturday in March in the reenactment of the “1668 Sack of St. Augustine.” During the day a 17 century-style military encampment will be open to the public at the Oldest House Museum (the Gonzalez-House useum) located at 14 St. Francis St., St. Augustine. Our local historians, play host to drills, demonstrations and living history interpretation from 10:00 AM to 4:00 PM. The reenactment of the sacking and burning of the town will commence Saturday evening at 4:30 PM in the old city. This event is sponsored by Searle’s Buccaneers and the Men of Menendez (members of the Florida Historic Militia), with the assistance of the St. John’s County Tourist Development Council. Searle’s Sack of St. Augustine is made possible in part by a grant from the St. Johns County Tourism and Development Council.

The procession that commemorates the arrival of the raiding pirates and introduces this annual event will begin at the Cathedral Basilica at 4:30 p.m. on the first Friday of March , and will proceed north on St. George Street to the Santo Domingo Redoubt on Orange Street. 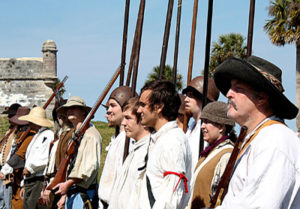 Visitors can see colonial St. Augustine in action at this living-history camp, where there will be period demonstrations with weapons, clothing, and equipment, as well as reenactments of camp life and social activities.

The reenactment of the battle between the freebooters and the city’s Spanish defenders will take place in St. Augustine’s historic district at 4:30 p.m. on the first Saturday of March, beginning at the Plaza de la Constitución and ending at the Old City Gate.

The English brigade will head up St. George Street from the Plaza toward the city gates, and the battle will commence when the English try to invade the Spanish defenders who will be stationed at the Santo Domingo Redoubt off Orange Street across from Potter’s Wax Museum.

Living history gets real when the period re-enactors demonstrate how the Spanish settlers had to fight off Searle and his pirates.

Events in the historic district are free.