On July 7, 1742, English and Spanish forces skirmished on St. Simons Island in an encounter later known as the Battle of Bloody 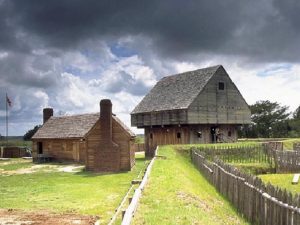 Marsh. This event was the only Spanish attempt to invade Georgia during the War of Jenkins’ Ear, and it resulted in a significant English victory. General James Oglethorpe redeemed his reputation from his defeat at St. Augustine, Florida, two years earlier, and the positive psychological effects upon his troops, settlers, other colonists, and the English populace rallied them to the cause to preserve Georgia.

Fort King George in Darien, Georgia is where the St. Augustine Garrison goes to re-enact the Battle of Bloody Marsh.  Because it is on State Park Property and not on Federal lands, we can have opposing lines and so present a more realistic battle scenario for assembled visitors.  The English and their allies are in the beautifully reconstructed Fort area, complete with period blockhouse, barracks, officers quarters, physicians quarters, kitchen area and oven, blacksmith area as well as cannon emplacements overlooking the marsh.  The Spanish are encamped on the hill overlooking the fort.

The Garrison loves going up to Fort King George and the park loves having us. 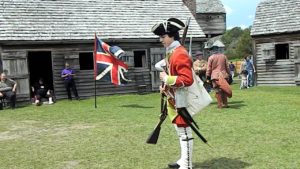 For the re-enactor, there are 2 restrooms with shower facilities  in the Park Office building, and golf carts are available to transport gear and those with physical disabilities between the encampments.

The park provides wood and you can have in-ground firepits. 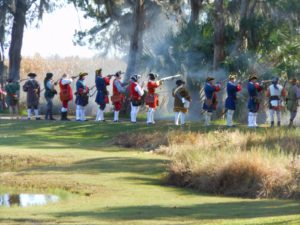 Check our calendar for actual dates and details of our event.

Friday is usually school groups, and Saturday is public day full of demonstrations and a battle. The pre-battle briefing is usually at 9AM and includes a mandatory safety check of all muskets.  Prior to battle, all ramrods must be left in the respective camps.