The abatis, abattis, or abbattis is a field fortification consisting of an obstacle formed of the branches of trees laid in a row, with the sharpened tops directed outwards, towards the enemy. The trees can be interlaced or tied with rope. Abatis are used alone or in combination with other obstacles. There is evidence the abatis was used as early as the Roman Imperial period, and as recently as the American Civil War.

A classic use of an abatis was at the Battle of Carillon during the Seven Years’ War (also known as the French Indian War). The 3,600 French troops defeated a massive army of 16,000 British and Colonial troops by fronting their defensive positions with an extremely defensive use of the abatis. The British found the defenses almost impossible to breach and were forced to withdraw with some 2,600 casualties.

An important weakness of abatis is that it can be destroyed by fire. Also, if laced together with rope, the rope can be very quickly destroyed by such fires, after which the abatis can be quickly pulled apart by grappling hooks thrown from a safe distance. An important advantage is that the abatis can be quickly formed in forested areas. This can be done by simply cutting down trees so that they fall with their tops toward the enemy.

The East Florida Rangers project will consist of using either a square or round (preferred) log, approximately 6 feet in length, 6 in diameter. Holes will be drilled in at 90-degree increments spaced 10 to 12 inches apart. The demonstration area will have tools for drilling holes (Tee handle drill), a spokeshave for sharpening and sizing the ends of the spikes, an axe/hawk, and poles. Two abatis should be constructed, one completed and one in the process of completion.

This can become one of the “STANDARD” demonstrations to be used when encamped. 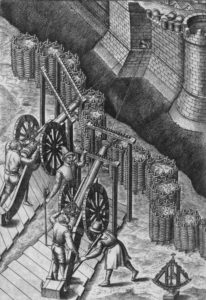 Early gabions were round cages with open tops and bottoms, made from wickerwork and filled with earth for use as military fortifications. These early military gabions were most often used to protect sappers and siege artillery gunners.  The wickerwork cylinders were light and could be carried relatively conveniently in a wagon, particularly if they were made in several diameters to fit one inside another. At the site of use in the field, they could be stood on end, staked in position, and filled with soil to form an effective wall around a cannon, or rapidly construct a bulletproof barrier.

During the Crimean War, local shortages of brushwood led to use of scrap hoop-iron from hay bales in its stead; this in turn led to purpose-built sheet-iron gabions. Constructing one is totally dependent upon the event and regulations affecting a campsite. However, you may want to be prepared to talk about the gambion.